I love pointers. Pointer is very a useful feature in programming languages like C/C++. I can pass weird hexadecimal numbers to a function and then it will magically locate where the program is in memory. However, all those values we see are merely virtual addresses, a running program’s view of memory in system. Any address we can see while programming user-level programs is a virtual address. It is no more than an illusion of where the data is actually laid out in memory. Only the almighty OS knows where the data actually locates in physical memory.

When the OS provides this layer of abstraction to translate virtual address to physical address, we say that the OS is virtualizing memory. In order to achieve virtualization, there’re three goals to keep in mind.

Efficiency: The OS should do its best to ensure the efficiency of virtualization, in both time and space. Some of the methods used to improved efficiency, including hardware components like translation look-aside buffer(TLB), will be discussed in the following chapter.

Protection: Being able to protect processes from interfering each other or even the OS is important. When one process performs actions like read and write, the process should be isolated so that it’s unable to modify the data of other processes or behave maliciously.

Before we start, there are several terms I will use throughout the discussion so it’s better to get familiar with them.

Physical address space: it is merely a collection of physical addresses used by the hardware. The value of the address can range from 0 to the MAXsys. The address is actually utilized by the physical memory to fetch the contents inside.

Logical/Virtual address: It a collection of address a process is able to access (the process is not aware of the actual physical location). It can be bigger than physical address due a technique called paging which will be discussed later.

Segment: A chunk of memory assigned to the process to use. 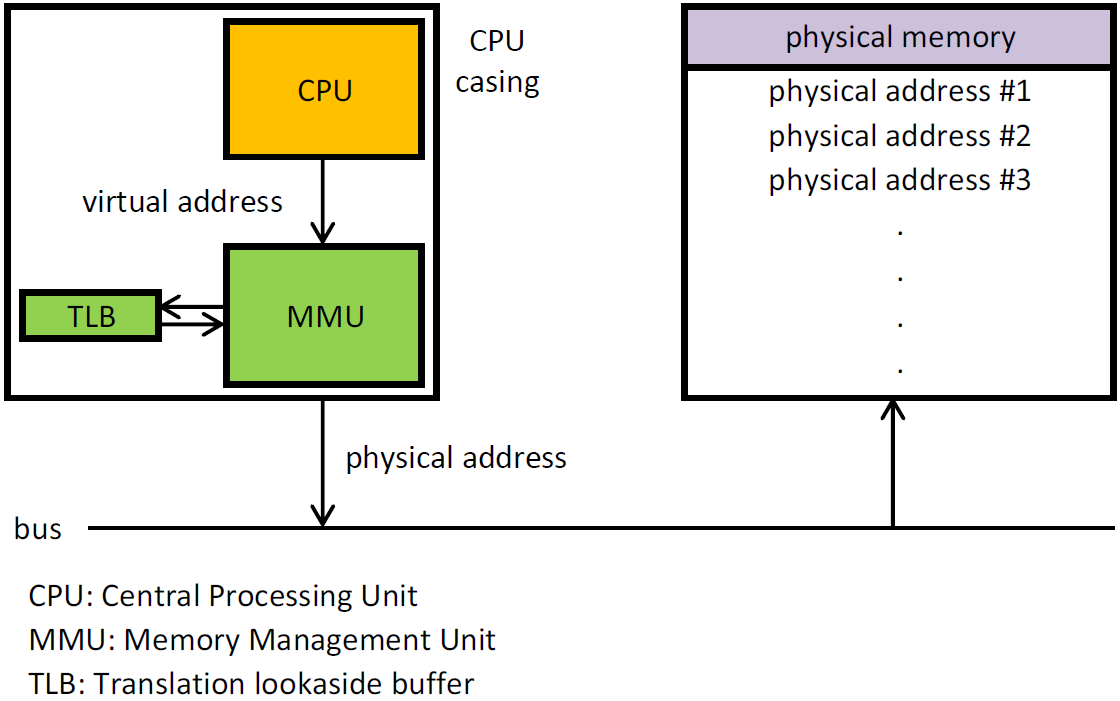 How does an address get generated

Same as uniprogramming, the OS locates at the highest location in the memory. The OS allocates a contiguous segment of memory for processes to use. If it doesn’t have enough space, it simply wait the process to terminate. The relocation address (also known as base address) is the first physical address a process can use. Limit address is the largest physical address the process can use.

Even though the concept of relocation is easy to understand, it can easily lead to problems with unused memory space. The biggest problem is external fragmentation. When a process finished executing and the memory it occupied is deallocated, it will leave a “hole” behind and become available for other process to use. The problem is, as the size of the emory of the previously running process can be any random number, the “hole” it leaves behind may be too small for other processes to fit in. Even if it is big enough for other processes to fit in, they may eventually lead to smaller fragments that are too small for a process to use, which leads to external fragmentation. There’s also another problem called internal fragmentation, but it won’t be discussed here.

How to minimize external fragmentation? 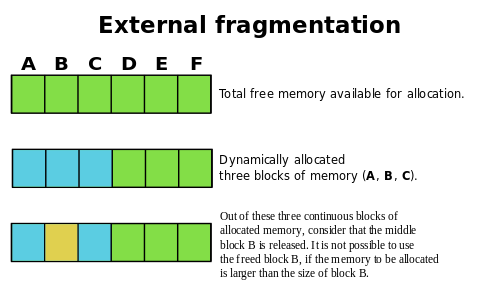 Finding the first free block that can hold the requested amount of memory.

Finding the smallest free block to allocate the request memory.

Technique to further reduce and eliminate external fragmentation will be discussed later.