Mutual exclusion is a common term appearing frequently in computer sciences. In essence, it’s a mechanism of concurrency control allowing exclusive access to some resource (or “critical region”). Token passing is an algorithm for distributed mutual exclusion (DME) and will be our focus in this post.

Thing we might want to guarantee for DME specifications are:

In addition, we need to analyze DME algorithms' performance metrics, which usually includes:

Let’s take a token ring as an example. In a token ring, a client holds a token and then sends it to the next one after exiting its critical section. When we make assumptions about a token ring, we 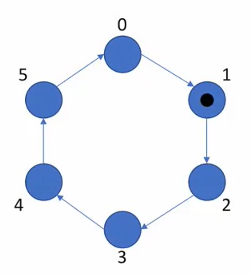 We want to guarantee that

To analyze token performance, we use the above performance metrics (message complexity, response time, and throughput)

A naive specification for mutex in Ivy would be:

To see token ring in action, we use the demo from Ken’s presentation:

grant is an action imported from the environment, thus we know when grant happens, all clients in the network do not hold a lock. On the other hand, release is an action exported from the system, which means the tester must perform grant given the host has the lock. So the tester won’t perform release multiple times like we did above because the tester can not violate the require lock requirement.