There are thousands of articles trying to explain what exactly a quantum state is. Many of them boiled down to “the state of a qubit is 0, 1, or 0 and 1 at the same time”. This statement leads to both confusion and misinterpretation. The explanation I found on Quantum computing for the very curious is by far the most elegant and simplest:

The state of a qubit is a vector in a two-dimensional vector space. This vector space is known as state space.

I will use many of great content from Quantum computing for the very curious to explain things.

Both the states \(|0\rangle\) and \(|1\rangle\) are called computational basis states, which maps to classical 0 and 1 states. There are more states for a qubit. We’ve already learned that a quantum state is a two-dimensional vector. An example is given:

For general quantum states, the amplitudes can be complex numbers as well. Denoting both amplitudes as \(\alpha\) and \(\beta\), a quantum state can be formally written as:

If we think of \(|0\rangle\) and \(|1\rangle\) as orthonormal vectors, we can visualize the possible linear combination of these two vectors as a circle of radius 1: 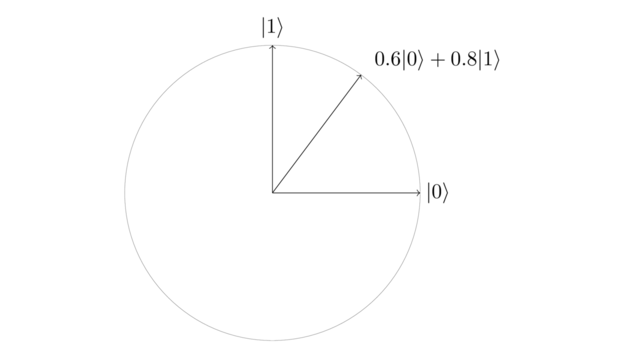 Since amplitudes can be complex numbers, the state space really becomes a sphere. Summing all these up:

the quantum state of a qubit is a vector of unit length in a two-dimensional complex vector space known as state space.

– Quantum computing for the very curious

Suppose we have qubit in a quantum state \(\alpha |0\rangle + \beta |1\rangle\). We want to observe the state of this specific qubit. It turns out the law of physics prohibits us from figuring out the the amplitudes \(\alpha\) and \(\beta\) if they start out unknown. In short, the quantum state of any system is not directly observable.