This is a summary over the high-level design of SAT solver covered in Prof. Dillig’s Automated Logical Reasoning class. It’s meant to cover the basic steps towards determining whether a given boolean formula is satisfiable or not.

A formula in disjunctive normal form (DNF) is a disjunction of conjunction of literals. It can be expressed as:

That formula states that \(\lor\) can never appear inside \(\land\) or \(\neg\). If we take a look at formula in DNF, we might claim it’s trivial to determine satisfiability of such formula. This is because, if we can find one element that evaluates to true, then due to the nature of \(\lor\), it must be that the formula evaluates to true.

The solution is to convert from NNF to conjunctive normal form (CNF). CNF is a conjunction of disjunction of literals:

Eventually, we will introduce a new formula:

The Davis-Putnam-Logemann-Loveland (DPLL) algorithm can be expressed as: 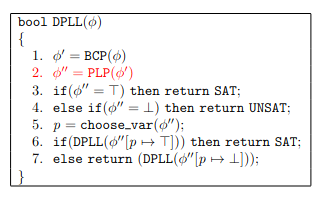 BCP stands for boolean constraint propagation. It requires that one of the clauses must be a unit clause. Performing BCP (or unit resolution) is same as replacing a literal with true in the original clauses.

choose_variable contains multiple heuristics. For now we can consider a variable is randomly picked.