The most common fault models is the fail-stop. It means a process completely “bricks”. When a process fail-stops, no messages can emerge from this process any more. We also don’t know if this process will ever restart. In addition, we must account for all possible states of the faulty process, including unsent messages in the process’s queue. On the other hand, it’s important to point out a process that takes a long time to respond is indistinguishable from a fail-stop. The intuition is such processes and the faulty ones may take an unknown amount of time before message emerge.

We use an example here to illustrate how and why a system fails to provide fault-tolerance. We take a system that replicates data by broadcasting operations using logical timestamps. This system uses Lamport clock to update local clocks (our previous post on Lamport Distributed Mutual Exclusion explains how Lamport clock works). In short, we overwrite the value stored in a replica if an incoming message has later timestamp \(ts\). 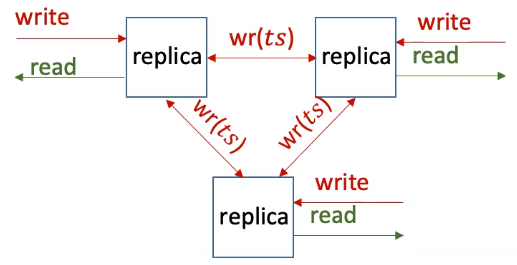 This system is not fault-tolerant. Imagine when one replica receives a write (marked by red incoming “write”) request and then tries to write the value to other replicas. This replica then fail-stops right after it writes to one replica and never writes to the other replica. In this case, not all replicas see the writes, thus violating consistency.

The solution to this problem is quite simple: reliable atomic broadcast. Under atomic broadcast, all writes are all-or-nothing. It eliminates the possibility for a process to fail-stop amid broadcasting.

Now let’s take the above example and update it with additional requirements. Instead of overwriting existing values, we append writes to an array and want to ensure every replica has the same array eventually. The major difference is that replicas needs to wait for acks with higher timestamps before it can append to its array.

This system is also not fault-tolerant. If one replica fail-stops, others will wait forever on a write, because every replicas relies on acks with higher timestamps before committing the append.

To see why \(t _{fail}\) is calculated this way, we use the following example to explain the process:

Now imagine \(q\) is able to broadcast a request right before it fails. Later, another process is able to forward this request back to \(p\). Then \(p\) needs to wait for three message transfer time plus two message processing time before it can assume that it will no longer receive message from \(q\).