Exokernel is a term every system researcher has heard of at some point in life. However, according to the PDOS group at MIT, there aren’t any exokernel-based operating systems in active use today. It’s interesting to discover what ideas exokernels brought to the OS high-level design and some potential drawbacks of such design choice.

Perhaps the most important thing to keep in mind is that exokernel operating system architecture pushes management of physical resources to the application level, contrary to what most monolithic kernel would do: providing hardware resource management through some form of abstraction, usually hiding hardware-related details.

Monolithic kernels usually enforce centralized resource management via a set of abstractions. In microkernel-based system, they are usually provided through some form of trusted user-level servers. There are several drawbacks:

However, generalization may not be a bad thing. As discussed in the UNIX the Timesharing System paper, having a generalized and unified yet limited file system API can simplify programming efforts. Accessing both ordinary files and I/O devices is achieved by utilizing a unified interface. Nobody today wants to implement a different set of policies just for character device or block device.

Essentially, exokernel consists of thin veneet that multiplexes and exports physical resources through a set of primitives. The libraries, running in the application space, use them to implement with special-purpose functionalities in a higher abstraction level. The architecture is shown in the Paper: 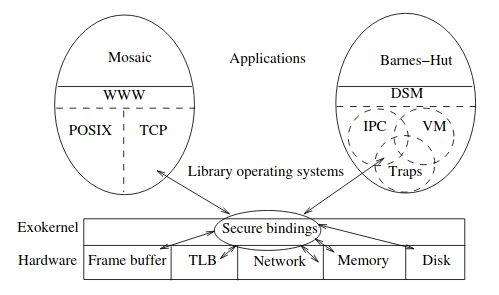 There are three majors tasks to separate protection from management:

The paper presents three techniques to achieve these goals:

In general, exokernel should expose hardware resources such as disk memory, CPU, interrupts, through low-level primitives with as few abstractions as possible. The resource management policy should be enforced by the library OS instead. The policy control boils down to whether the exokernel permits resource allocation.

One of the primary tasks of an exokernel is to multiplex resources securely, providing protection for mutually distrustful applications. Secure binding allows the kernel to protect resources without understanding them.

Secure binding is rather abstract and hard-to-comprehend concept without concrete examples. Here are some examples illustrating how secure multiplying is achieved through secure binding.

Take memory allocation for an example. When a library OS tries to allocate a physical memory page, the exokernel creates a secure binding for that page by recording the owner and the capabilities specified by the library OS. Essentially, accessing memory resources is achieved through capability. The exokernel acts as a door-keeper that checks the validity of the capability from the library OS.

I personally like to think the role of the exokernel in memory system is to act as a security guard that protects resources that can be access by the library OS through some form of interface. For example, if the hardware defines a page-table interface, which can be accessed by the lib OS, the exokernel must guard the page table. If the lib OS tries to enter a new virtual-to-physical memory mapping, then the exokernel must check the corresponding memory capability.

In summary, privileged machine operations must be guarded by the exokernel.

Up to this point I find it still hard to full understand what exokernel is capable of. Having a concrete system to study for is much more helpful. So here comes Aegis.

Here is a subset of Aegis’s primitives and sys call interfaces that encapsulate these exported primitives. Having a concrete list feels so much better than reading a list of abstract terms!

Here is a sublist of primitives:

And here is a sublist of system call interfaces:

When a TLB miss happens, there are several steps happening:

The key takeaway here is the exokernel itself is involved in very few privileged operations such as interacting directly with the hardware via low-level primitives. the bulk of the work is done in the application level.

Because the kernel contains minimal functionalities, it can be extremely fast compared to a monolithic kernel. However, does that mean the overhead is shifted to the library OS instead?

The most prominent feature about library OS is that it manages operating system abstractions at application level.

The GEMM operation on both ExOS and Ultrix (a monolithic kernel OS) doesn’t seem to have much difference since GEMM doesn’t use any special abilities of both OSes. It does indicates that the performance gain from the minimal design of exokernel is somewhat cancelled out by the application-space overhead.

The exokernel paper mentions that in the context of networking, the major reason for ExOS to download code is that the network buffers on our machines cannot be easily mapped into application space in a secure way. Downloading the code into the kernel allows applications integrating operations such as checksum during the copy of the message from these buffers to user space. However, I’m a little bit skeptical of this statement today. Usually a highly performant TCP stack will be implemented in userspace, along with some polling (DPDK for example). But it will be interesting to compare the exokernel approach to the gigantic Linux TCP stack. The second reason is downloaded code is bounded, thus allowed full context switch to an unscheduled application.

I do find the graph in the exokernel paper interesting. It shows that when application-level message handlers are downloaded into the kernel, the roundtrip latency is almost not affected by the number of processes. Since the operation is performed inside kernel upon message arrival, no handling is needed from the application. This has the advantage that application handler is subject to scheduling, which has performance implications. (The choice of scheduler is the key bottleneck here.) 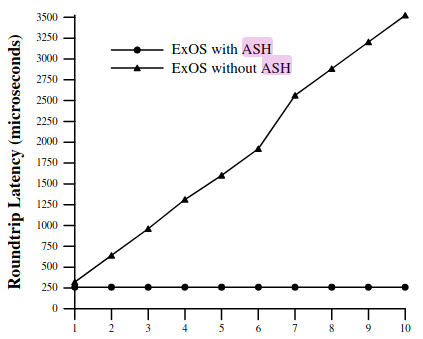 It a natural property of exokernel since the exokernel itself is simplistic. Thus, operating system abstractions can be redefined simply by changing the library OS. Thus, applications have finer-grained control over resources. However, I think it comes at a cost. In a monolithic kernel, applications are subject to general purpose scheduler. Having modular domain-specific schedulers can indeed improve performances, however, it might also leads to multiple scheduler contention, which is not covered in the paper.

Exokernel does offer some new insights into system design. The simple design concept of the exokernel itself has major performance benefits as well as a limited set of primitives which gives much freedom to the application. However, that means the library OS has to take more responsibility. The paper didn’t cover enough analytics on more general use cases. The performance gain seems to come from some highly specialized, exokernel-specific implementations of OS abstractions (such as IPC, VM, etc.). The more general case, such as GEMM, seem to be much less performance, when compared to traditional approaches. It will be good to see how exokernel performs under more diverse workloads.

I’ve also heard that one reason microkernels never took off was partially due to the performance slowdown compared to monolithic kernels. Since exokernel shared many similarities with microkernels (seems like exokernel is a more stripped-down version of microkernel since it barely has an OS core), it will likely fall into the same caveat. However, there doesn’t seems to have a comprehensive benchmarking trials to compare all major types of kernels.