In a distributed system, it is common for processes to reach consensus. When all non-faulty processes terminate, we must guarantee that everyone agrees on a specific value. Unfortunately, FLP 1985 1 proved that no asynchronous algorithms could achieve consensus.

Initial State Must be Bi-valent

We will use these facts to show why an algorithm will run infinitely under asynchronous assumptions. First, we claim that some initial state is bi-valent. This claim must be true by the proof of contradiction. Suppose we have some initial state that is uni-valent. We say two states are adjacent if all processes in both states agree on all values except one process. Two adjacent states must be either 0-valent or 1-valent (agree the global value is either 0 or 1).

For example, let’s say we have five processes in an initial uni-valent state (0-valent). We modify only one process’s value from 0 to 1 between two adjacent states. At some point in time, the system states changes from 0-valent to 1-valent (we refer to this moment as the crossover point).

Second, given the initial state is bi-valent, we then show that for any bi-valent state, we can always deliver the next message to process \(p\) while staying bi-valent. This means we can’t reach a certain decision no matter how much time has passed. More precisely, we will prove that no message can transform a system into a decided state by contradiction. 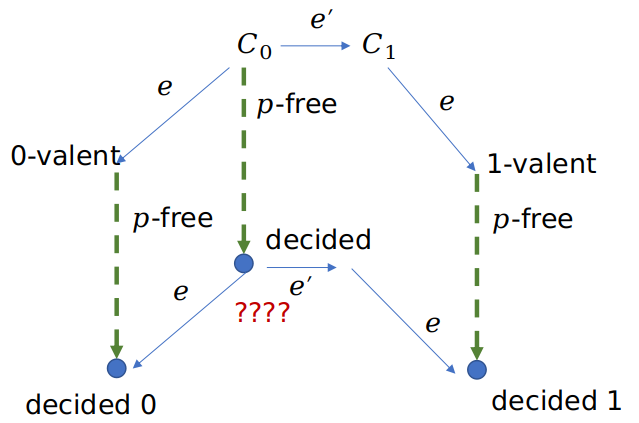 So, given the proof that we can’t reach consensus under asynchronous assumptions, what is the best we can do in practice?

We will back up a little bit from the asynchronous case, and make compromises by having: (1) consistency/agreement under the case of asynchrony; (2) settle for the lack of termination.

In Paxos algorithm, we assume the majority of process are non-faulty. That means \(N > 2F\). Processes have three roles: proposer, acceptor, and learner. Proposers broadcast its proposals to all acceptors; acceptors accept a proposal (e.g. based on arrival times of proposals) and broadcasts accept messages to all learners; learners decide which values to accept (e.g. the majority of a accepted value).

To fix this problem, we can reduce the number proposers to one. At any moment, only one proposer is the leader. If a leader fails, a new leader becomes available and start sending out proposals.

However, this solution still suffers from the same problem: if new leader is elected, it can not know whether the old leader’s proposal will be accepted.

To see why this is the case, suppose an old leader dies at some point, then a new leader comes in. This new leader broadcasts a \(prepare\) message to acceptors. Some acceptors reply back. We argue that if the old leader’s proposal is accepted by the majority of acceptors, then this new leader will preserve the old proposal by evaluating the replies from acceptors and re-proposing the latest accepted value in the prepare phase.

The reason is: if there exists a majority of acceptors in the previous round, then there must exist at least one acceptor in both the old and the current round, because add the sum of majorities exceeds the total number of processes. Therefore, there must be at least one acceptor that can send its accepted value back to the new leader. Since there is only one leader at any time, we can safely say the old value will be sent to the new leader.