BGP in a Nutshell

Border Gateway Protocol (BGP) protocol has a very simple purpose: choose the fastest and the most efficient route to deliver a message from one autonomous system (AS) to another. In layman’s term, BGP is the GPS for the internet. Many contents here are credit to Prof. Mohamed G. Gouda .

Gateway: A gateway is defined as a router that is connected to computer in two or more ASes.

Abstractly, each router has a BGP routing table in the form of:

First we will go over eBGP. We know BGP uses TCP to send messages and eBGP is no exception. The TCP connection exists between:

These gateway pairs sent route advertisements in the following form (represented as a tuple):

The BGP next-hop attribute is the next hop IP address that is going to be used to reach a certain destination.

Here is an example illustrating how one AS lets other ASes know the route leading to itself. Assume we have three ASes. AS1 wants other ASes to know how to reach itself:

AS1 is trying to broadcast the path to reach itself, it sends the first route advertisement message (1) as:

Now AS2 receives the message from AS1, it updates the AS-path by appending itself to the path list. It also needs to update the next-hop attribute because an incoming message needs to find the best address to reach AS2 before reaching AS1. AS2 broadcasts the message (2) as:

Notice \(B_2\) doesn’t have an explicit next-gateway-hop in its routing table. This is because so far we’ve only covered eBGP which works across different ASes. For a message to go from \(B_2\) to \(x\), it must go through routers inside AS2 internally, which brings up internal BGP (iBGP).

For iBGP, there is a TCP connection between each two routers in the same AS, given the only one of them is a gateway.

Here is an example. Suppose the gateway \(A\) in \(AS_j\) needs to broadcast its routing information to other routers in \(AS_j\): 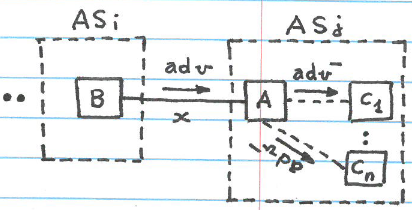 For the iBGP advertisement, it will only be \((pf,\ x)\). Intuitively, this makes sense, because we only need to worry about the next best hop to reach \(pf\) without worrying about changing the AS. All the routers (\(C_1,\ …,\ C_n\)) receiving the advertisement from \(A\) will add the information to their routing table as:

That is it. There’s really nothing difficult about BGP in general.